After several days wherein Sharon felt very ill and had problems with swelling, shortness of breath, hypoglycemic crises, vomiting and chest pains, she is now much, much better. A whole bunch of folks must have sent her healing energy because her edema is down, chest pains gone, dizziness and vomiting gone and her shortness of breath is better. She still requires lots of sleep but hey, so do I. J Anyway, she’s felt well enough that when Jerri, her daughter, came up to visit, we were able to go on a local field trip investigating two local cemeteries.

I happen to have a great deal of fondness for cemeteries and always have. During the Victorian era they were quite popular as picnic sites since they were far and away the best landscaped area around. Families would come with a huge picnic lunch and a servant or two to lug the baskets and set up the kitchen and all that. Quite the production!

But I just like the quiet, the beauty, the wonderful old fashioned names, the unusual headstones and monuments, and every once in awhile, a ghost. That is what Jerri and I encountered at the first cemetery called the Old Salem Cemetery built near the Salem Methodist Church. The cemetery and church moved, hence the “Old” moniker.

This was a very small cemetery with about 26 identifiable markers. There were also approximately 31 unidentified graves with only field stones to mark where they lay. Of the marked headstones we saw families of Self’s, Duckworth’s and Lance’s. This whole area, formerly Cherokee territory, was part of Union County, which was created by the Georgia Legislature on December 3, 1832. It was named “Union” by John Thomas, the first local representative, who is reported to have said, “Name it Union, for none but union-like men reside in it.” I don’t know how true that was but it was definitely the Scottish, Irish and English descendents who were the predominant settlers in the area. They may have been union-minded men or no, but at least the names held no particular surprises.

While walking around the headstones at Old Salem Cemetery, Jerri was taking pictures when I saw an older woman, approximately 40’ish, standing near the unidentified graves. Her clothing was coarse and homespun, her dress long and gathered at the waist. An apron covered her front and she had some kind of cap on her head catching up her hair behind her. She simply stood with her hands clasped beneath her apron, looking down at the ground. She had an attitude of weariness about her and looked like a farmer’s wife. If she had been, and she and her husband had been buried in the area with no headstones, than she would have had every right to be weary. Those were very hard days for settlers in the early 1800’s, pioneering days where the land had to be cleared by hand and turned over by horse-drawn plows, and crops seeded and the seedlings weeded and protected from the birds until tall enough to survive on their own. There were very few amenities within close distance. Women spun and wove and sewed their families clothes and took care of the house garden and everything in the house and the milking of the cows supervised the rising of the cream and made the butter and took care of the chickens, if they had any, and, of course, took care of the children. As I thought about all of this, her name came into my head - “Sarah.” Her last name started with an “S” but I wasn’t sure if it was “Spencer” or “Self.” I called all of this out to Jerri who spotted a headstone with “Sara Self” on it and another much smaller one with just the initials, “S S” on it. I couldn’t be sure if either of these were this lady’s marker since she appeared to be too poor to have been able to afford one. I thought it was more likely that she was buried in the fieldstone area and thus unidentified. I could be wrong, of course. I’m not infallible.

From there we drove to the Union County Historical Society housed in the old County Courthouse. We explained that we were looking for the background on the Old Salem Cemetery and who was buried there. There were two ladies on duty and one pulled out marriage and birth certificate lists as well as lists of known bodies buried in the cemetery. There were plenty of Sarah’s but no Spencer’s. I could have been mistaken, of course, and she could very well have been one of the Sarah’s buried there, either Sarah Self or the other anonymous “S S.” I wasn’t getting much from her and wondered if this was just a thought form left behind by the former lady. Thought forms perform repetitive actions and are just energy expending itself and eventually just die out. They’re completely harmless though they can certainly be startling. I can generally pick up more from an actual ghost, or someone who is presently no longer in his or her body and for unknown reasons is still hanging around. Or even from someone who is alive as we understand it but having an Out-of-Body experience. Much more can be sensed from folks who are ‘altogether’ there, natch.

I explained to the ladies what I had seen and they were delighted with my ‘ghost-whispering’ talents. One of the ladies asked if the old County Courthouse had a ghost because of various sounds and doors opening and closing, etc, and I said I’d take a tour and let her know. I hadn’t stayed in an altered state when I came in so that I could fully focus on this reality but now I entered the state of consciousness necessary to be sensitive to other frequencies. That’s how I see myself - I’m like a radio receiver with a very good tuner and by moving my focus (dial) up and down on the frequency waves I can pick up all kinds of things. I’ve done this my whole life, but I haven’t always mentioned it to folks. You get looked at kind of funny when you do.

Anyway, I felt nothing downstairs so I walked up the stairs to the restored old court area which was now used only as a music or entertainment venue. The old judge’s chair was still in place, as was the juror’s chairs and the prosecutor’s and defendant’s tables, and a rail separating all of this from the audience. I stood in the back of the courthouse and relaxed into a deeper ‘trance,’ I suppose you could call it. In a few seconds I saw a middle-aged man, portly and jolly looking, appear to the left of the judge’s chair. He was looking at the chair and smiling with a very self-satisfied look on his face. He wore a long frock coat, colorful vest, black leather shoes, black tailored pants and a somewhat higher white collar and cravat. His hair was light colored, more blondish than white, and he appeared very cheerful and well-fed. I got the feeling that he had been if not a judge than someone who was well-acquainted with the activities of the court house.

I walked back down the steps and to the offices where the two ladies were still working and assured them that yes, they had a ghost upstairs, but he felt very friendly and not in the slightest bit scary. I drew a picture of him for them and we figured that he might have been one of the traveling judges in the very early 1800’s before the first judge was finally appointed. That would keep them busy for a bit and very excited about having their own ghost.
Posted by Lea at 1:05 PM No comments:

Not quite the Cheshire Cat... 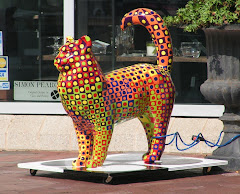 One of the many cats and dogs painted and put up for auction to support the local humane society. 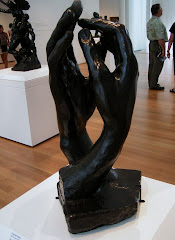 I forgot the title for it but it was definitely not 'The Hands.'

Beneath the Lighted Lions Man. 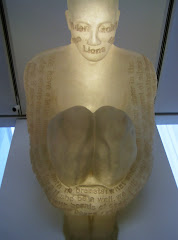 There were four of these guys sticking out from the walls near the ceiling. They were very large and pretty cool, I thought.

Yea, though I walk through the shadow of the valley of death I will fear no evil for I'm the meanest sonavabitch in the valley. My rod and my staff comfort me, so come and get it.

Lea
A cheerful and wildly independent 55-yr-old woman and her two cats, Fluffbutt and Chopper, and two Bendy Men buddies who are traveling around the U.S. in their camper van and meeting wonderful people everywhere.